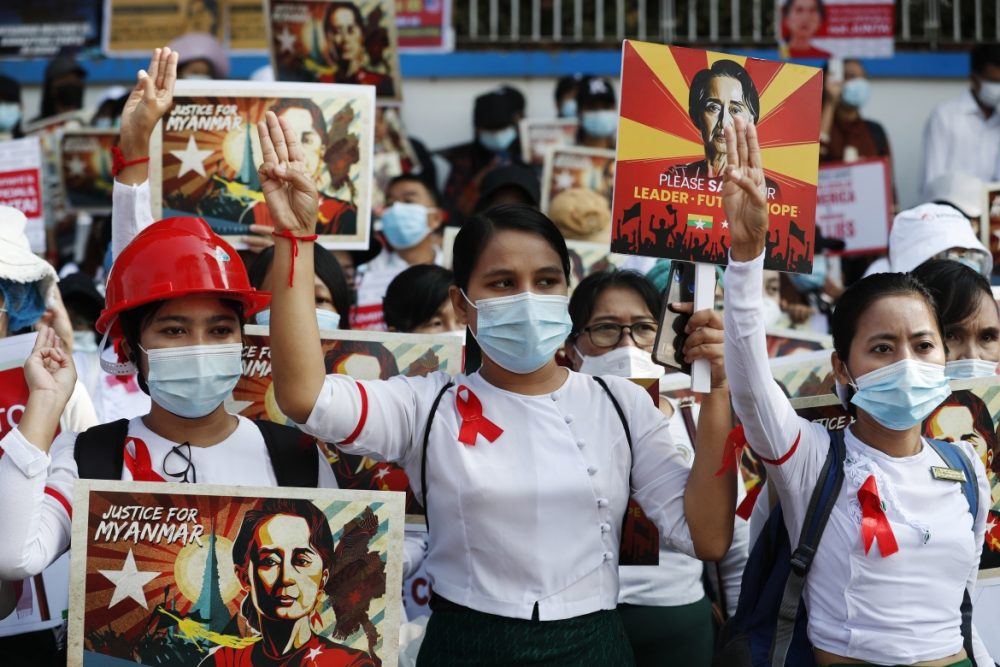 Posted at 11:02h in Student Blog by School Newspaper
Share

Democracy is something that we take for granted in countries like ours. Every certain amount of years, we go and vote for the people we want leading our country. The power goes to the people, as it should because everything that the higher-ups do will affect us. However, democracy is being dismantled in nations around the world.

On February 1st of this year, the Tatmadaw, the Burmese military, held a coup and overthrew the elected leaders of the Burmese government. In the November general elections last year, NLD (National League for Democracy) won in a landslide. The Tatmadaw claimed that the results of the elections were fraudulent and proceeded to arrest the leaders of NLD, including state counsellor Aung San Suu Kyi.

The Tatmadaw claims that this coup is to honour the integrity of the election and give the people what they want. Yes, of course, and pigs can fly. The people of Myanmar do not want this. They want peace and freedom. They do not want to be stripped of their human rights. The real reason the military is doing this is to keep its power with the commander-in-chief vulnerable to being charged for war crimes during the Rohingya conflict if he were to lose power. It should also be noted that the commander-in-chief of the military and his family has financial and business interests. The wealthy and power-greedy elites will do anything to stay in power, even if it means sacrificing the rights of the common people. How original.

Of course, the people of Myanmar retaliated. Starting 2nd February, civil servants and workers including healthcare workers, teachers and railway workers walked off their jobs and held labour strikes nationwide. This initiated the start of the Civil Disobedience Movement. The commander-in-chief of the military pleaded for civil servants to go back to work, but why should they? Why should they obey a military government that doesn’t listen to its citizens? Other campaigns include boycotting services and goods related to the military and residents in urban centres have banged pots and pans in protest. This isn’t the first something like this has happened in the recent history of Myanmar. This also isn’t the first time mass protests have broken out in the violent history of Myanmar.

The 8888 Uprising in Myanmar, over 30 years ago, was started by student protesters and eventually spread to include monks, doctors and common people. These protests strived for democracy and spoke out against police brutality, military rule and economic mismanagement. 14 years ago, the Saffron Revolution took place in protest against the economic distress of the country caused by the military junta. While the common people of Myanmar were barely struggling to make ends meet, the military was living a life of privilege, causing one of the biggest gaps in wealth. Both of these non-violent movements were met with violence and brutality from the military. In the Saffron Revolution, the number of casualties are unknown but are estimated to be between 13 and 31. Several hundred were detained and arrested for fighting for their beliefs. The authorities stated that around 350 people were killed during the 8888 Uprising, but the actual number is thought to be in the thousands. Over tens of thousands were arrested and sent to prison. The events of the 2021 protests mirror the previous movements.

As of writing this piece, at least 60 people have been killed. The police fired live ammunition into crowds of peaceful protestors simply fighting for their rights. More than 1700 people have been arbitrarily detained – arrested even though they didn’t commit a crime. The AAPP (Assistance Association of Political Prisoners) stated that “The military is treating peaceful protestors in Yangon as a war zone. The military is creating terror, again,”. The military has suspended fundamental rights with arrests and house searches being made without warrants. They’ve enacted internet blackouts in order to gain control and repress and censor citizens, which have led to the spread of misinformation. They’ve imposed martial law, installing curfews in an effort to stop protests and rallies. They’ve even paid people to act as pro-military protestors, who have been violent and attacked both pro-democracy protesters and bystanders. The audacity is astounding.

The Tatmadaw is sacrificing the lives of innocent civilians for the purpose of gaining control. Let’s not forget about the crimes that the Tatmadaw has committed against the ethnic minorities of Myanmar. We do not want Myanmar to go back into the dark ages of military dictatorship. We want democracy. We want freedom. We want equality for ALL people of Myanmar. I stand with the people of Myanmar in the fight for justice and the fight for fairness. I stand with all people around the world in the struggle for democracy and restoring fundamental freedoms.

I love listening to music. Some of my favourite artists include Seventeen, Panic! At The Disco and Mamamoo. I’m also passionate about human rights and fighting for equality.