Your Name: The Sophisticated Story of Stimulating Change 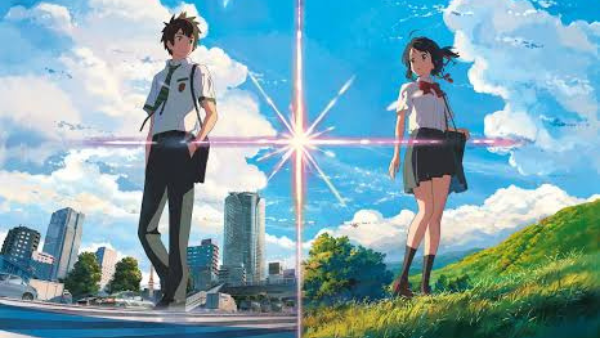 03 Aug Your Name: The Sophisticated Story of Stimulating Change

Posted at 10:29h in Student Blog by Jenna Edwards
Share

Have you ever had a dream that you could never recall? The sensation of losing something… that you could never remember? The complex story and plot of the 2016 animated film Your Name stars the voice actors Mone Kamishiraishi as Mitsuha Miyamizu and Ryunosuke Kamiki as Taki Tachibana. The well-known fan favourite was awarded Best Animated Feature Film at the 2016 Los Angeles Film Critics Association Awards and grossed over $380,000,000 USD at the box office. With this, it became the highest-grossing Japanese film of 2016 and the 3rd highest-grossing anime film of all time. Receiving a high rotten tomatoes score of 98%, I would go so far as to say that the film deserves every bit, if not more success, than what it has gained throughout the years.

Director Makoto Shinkai, wanted to capture tragic events that lay in Japan’s history through the eyes of a teenage boy and girl, Mitsuha and Taki. The film was released on 1st December 2016; successfully becoming one of my favourite films of all time.

The romance/fantasy film goes through themes of fate and tradition metaphorically highlighting love and youth from the perspective of modern-day teenagers in Japan. 17-year-old Mitsuha who was born in the rural area of Itomori longed for a stimulating life in the capital. Almost like a dream, she one day woke up in an unknown bedroom in the bustling city of Tokyo — it was the life she had yearned for. But, she wasn’t herself. She was a boy named Taki? What she thought was a passing dream was confirmed as reality when she came to the realisation that she had switched bodies with the 17-year-old Tokyo boy Taki Tachibana.

After understanding their situation, they both decided to work together in order to maintain a normal lifestyle as if they hadn’t switched bodies, leading to the creation of a deep relationship. Without meeting each other in person, the pair found themselves in the cliche of the enemies-to-lovers trope which escalates to long-lost love. Will they be able to meet each other in person? What troubles will the pair have to overcome in order to meet each other?

The exhilarating film will pull at your heartstrings as you empathise with the characters as Mitsuha and Taki represent and symbolize modern-day teenagers who stumble across the sophisticated situation of fate.  At one point, I was definitely at the edge of my seat confused and baffled as to what happened. However, when it comes together it will leave you mesmerized by the truth. The film is widely known for its beautiful animation as the scenes and landscapes capture simplicity, but also intricate detail that is aesthetically pleasing to the eye. The calming non-diegetic sound (background music) that follows the visually appealing art matches the refreshing and satisfying scenes, putting the audience in a delightful mood.

Overall, ‘Your Name’ is just a masterpiece that deserves more attention. It would suit young teenagers and those who like innocent love, but also tragic events between youth. I urge you to give it a shot as it made me feel a lingering sensation of satisfaction at the finale after the suspense that felt like a rollercoaster. Definitely a must-watch film to watch with family and friends.

Director: Makoto Shinkai
Cast: Mone Kamishiraishi, Ryunosuke Kamiki, Aoi Yuki, Ryo Narita
Running time:  112 min
Verdict: A film that I’d watch over and over again and not get sick of it.
Stars: 4.5/5