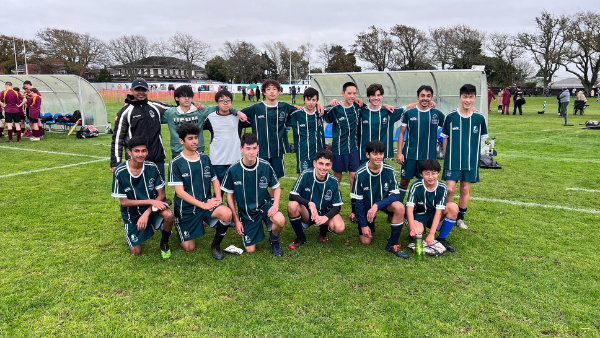 Posted at 11:18h in Sport by Jenna Edwards
Share

Winter sport is in full-swing and our teams are achieving some great results, not to mention our students who have been selected at representative levels. All the details are below:

On 11 June, the 2nd XI Boys’ Football team had their first competition game against St Peter’s College after some tough grading games. In the first 5 minutes Luke Mason scored an amazing goal from outside the box that looped beautifully over the keeper’s head. Shortly after that Jared Kershaw scored his first goal of the season from a corner to make it 2-0 very early on.

Unfortunately, the team did let one slip past the defence, also in the first half. The boys worked tirelessly to hold on the advantage from the first half and some cool and calm keeping from Jacob Ansell sealed our first win of the season. Player of the day went to Josh Campbell for his awesome defensive play.

The Pakuranga Junior Academy is improving as the season progresses, claiming a 2 – 0 win against King’s College on 18 June. Coach Asneel Datt says, that players are trying their best to develop holistically.

“Every week the team tries to work on different scenarios and execute those during the game day. There are plenty of smiling faces in our hardworking team after three straight wins.”

Our netball players have been putting in some big performances each week and 11 June, saw eight of 12 teams win their games – with some big margins too!

Our U15 Girls’ Hockey team recently had a 12 – 0 over Macleans, which they then backed up with a 6 – 0 win over Diocesan. The girls are having a stellar season, winning all six of their games so far and placing 1st in their grade.

Both the Boys’ and Girls’ Open A Basketball teams have both had great starts to their seasons. The boys won all their games to sit at the top of the table, while the girls have won two of three games to place second in their grade to date.