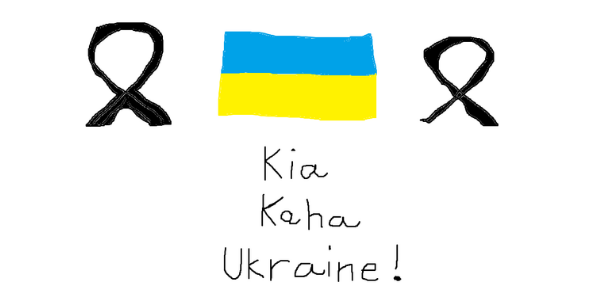 Posted at 13:58h in Student Blog by Jenna Edwards
Share

It began on the 24th of February, with a livestream video from a Crimea-Ukraine border crossing station at 3:59am showing Russia’s first signs of invasion. We’re familiar with what happened next – the missile attacks near Kyiv and artillery use in Kharkiv, as well as the strikes that have spilled all the way from western-Ukraine, in Ivano-Frankivsk, to Mariupol in the east.

By 12:37pm that first day, Ukrainian authorities reported that more than 40 soldiers and 10 civilians had been killed. At the time this is being written, 24 days after Russia began its attacks, it is estimated that there have been at least 16,000 deaths on both sides, and at least 3.3 million people displaced.

There are videos and photos of the conflict emerging online. Many have seen the photo of a woman with a bloody bandaged head, injured by the missile strikes. Many have seen the video of a crying boy walking towards the Polish border. Many have seen the devastation of the war, yet it continues. President Vladimir Putin has justified this with inaccurate claims of abuse and genocide in Ukraine, painting the war as a step towards the “de-Nazification” of Ukraine. These acts by Russia are unjustifiable.

In our school’s Amnesty International group, we are working to prevent human rights violations such as Russia’s invasion of Ukraine. This term, we are holding a mufti day on Wednesday 6th April to raise money to donate to the United Nations International Children’s Emergency Fund and Red Cross. These organisations will provide food, shelter, and other emergency supplies to refugees of the war. We are also organising other fundraising events for Ukraine throughout the next few weeks, so keep an eye out for information! Until then, help those in need by participating in mufti day. You’re only a gold coin away from making someone’s day just a bit better.