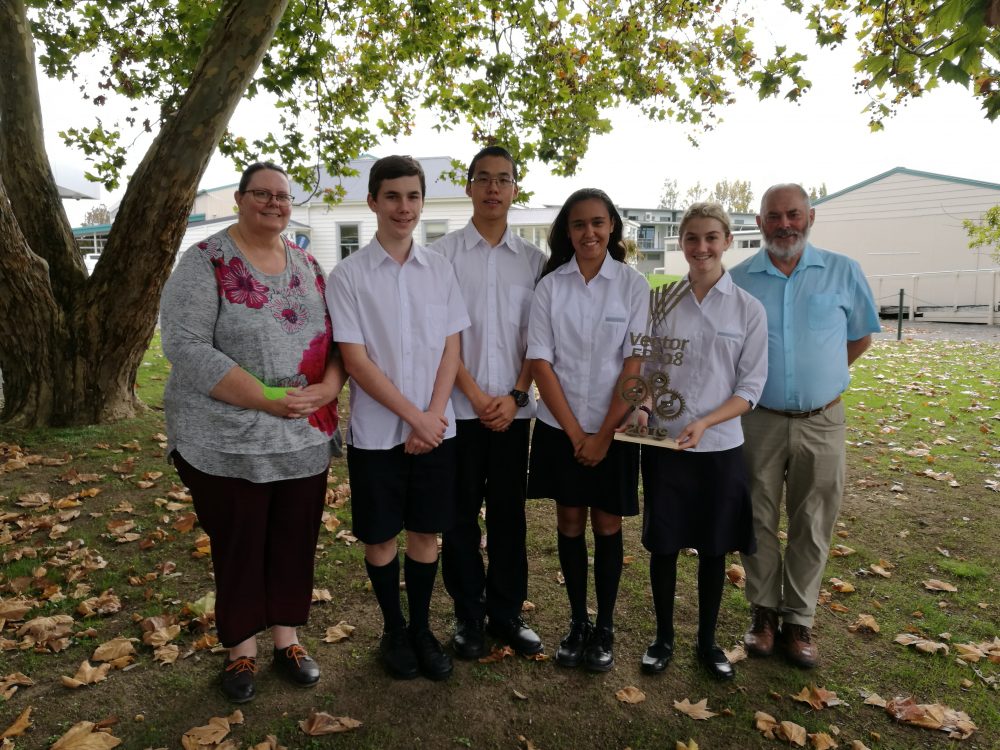 On Tuesday 30th April, students Ben Agnew, Alexis Usal, Peita  Houkamau and Jeremy Ishi travelled to Western Springs College to compete in the finals of the Vector Auckland EPro8 Challenge.  From an original 50 teams in the preliminary rounds of the Senior competition, only 12 qualified for the grand final event.

Sometimes described as a STEAM competition, sometimes as engineering, sometimes applied maths, physics or electronics, the EPro8 Challenge is actually a whimsical combination of all of these things mixed in with humour, fun, creativity, teamwork and considerable intellectual challenge.

The theme for this event was ‘arcade games’, and the signature piece of equipment a set of thirty yellow plastic squares, each about the size of a placemat.  These were the ‘pixels’ which were to be used to recreate the screen monsters that loomed unbridled in every corner dairy in the closing decades of the twentieth century.

There were four challenges:

With no chance of completing all of the challenges, each team was free to strategically select which they would attempt to complete during the two and a half hours of the competition.

Tasks were broken down into stages and progress scores were updated on a big screen in real time as the competition progressed.   Creations were constructed from a sort of giant meccano set that included aluminium rods, rope, motors, gears, pulleys, timers, switches, light sensors, lights and wheels.  Right from the start the Pakuranga team was among the front runners, lying in second place for most of the first hour, seemingly unable to catch the leaders who stayed persistently one jump ahead.

However, about 40 minutes before the end, Pakuranga hit the lead and then began a  race to build a buffer in case the other team was storing their points for a surprise onslaught at the last minute.  When the final buzzer sounded, Pakuranga was in the lead as the teams stopped building and sat down to await the final round of marking.  Several teams made good gains during this round of marking, but when the judge came to mark the Pakuranga space invader, a sensor malfunctioned and the monster failed to reverse when he reached the edge of the screen.  No more points for Pak, but second place had their lights flashing which meant they were still in the race for more points.

The big screen was now killed off,  and no-one could tell what was happening with the points. However, the screen finally came back to life and the result flashed up there was Pakuranga College – winner of the Senior Auckland EPro8 competition for 2019!

by Harold Russ, Head of Robotics