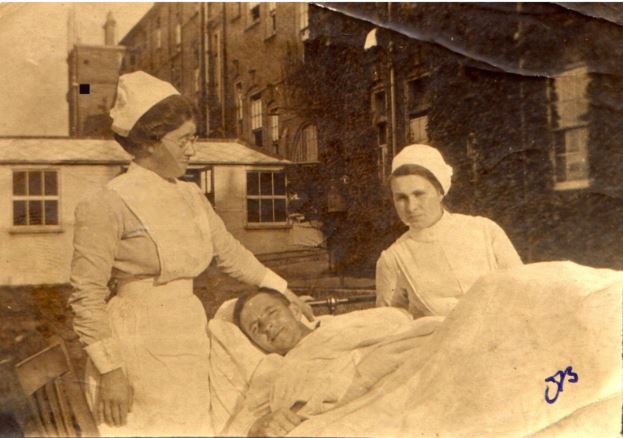 Posted at 12:27h in General by Roisin Lamb
0 Likes
Share

This week, History students had the privilege of learning about the WW1 experiences of Pakuranga College English teacher, Steve Dymond’s grandfather:

One hundred years ago today, my Grandad, David Boyce, was severely wounded at the Battle of Langemarck, Third Ypres. His battalion – the 9th Royal Irish Fusiliers, were part of an attack on German strongholds on 16th August.

The action is described on the 36th Ulster Division website:

The Ulster Division was to advance about two and a quarter miles to reach its objective – an imaginary “Red Line”. At 4.45 a.m. the men left their trenches but: pounded by high-explosive, shrapnel, and gas shells; ravaged pitilessly by machine-gun fire from impregnable concrete pill boxes protected by barbed wire entanglements; saturated by the rain; lost in a featureless landscape; and encumbered by the clinging mud: only a little ground on the left was gained, and by nightfall most of those still alive were back where they had started. That any progress at all was made is a tribute to the bravery and determination of the men, for the ambitious plan, conceived in the comfort of a distant headquarters, defied reality and was fatally flawed. In the dreadful conditions of the battlefield the British artillery’s preliminary barrage and its subsequent “creeping” covering fire, which went far ahead of the attackers, were ineffective; and a few supporting tanks, bogged down in the impassable mire, never appeared. Furthermore, a weary division, which had already sustained some 2,000 casualties due to enemy action during the previous two weeks, should never have been ordered to attack in the face of such overwhelmingly adverse odds.

For the capture of a few worthless yards of mud the attack resulted in 58 officers and 1278 men being gassed or wounded. During its sixteen days in the line, from 2nd to 18th August, the Division suffered the total loss of 144 officers and 3,441 men either killed, wounded or missing.

The pitiful tragedy of “Third Ypres” continued its bloody course until, on 4th November, the battle ended when the Canadians captured the muddy mound which had once been the village of Passchendaele – a name now associated irrevocably with the battle and which, perhaps, recalls more poignantly the sorrows of the men who fought there.

David Boyce received machine gun wounds to the legs and lay out in the mud of No Mans land for some time before he was recovered. He was repatriated to England and finally left hospital for good in 1922.

My two great uncles (David’s brothers) fought alongside him and all three survived the first day of the Somme, 3rd Ypres and everything in between, although two were wounded and one suffered shell shock.

He was left with one leg three inches shorter than the other and a vivid set of scars down his legs, which I used to put my fingers in when I was a small child.  He used to walk with a pronounced limp and wore a wedge under one shoe for the rest of his life.  He later became a postman and never took a day off work until he retired.  As a result he was awarded the Imperial Service Medal.