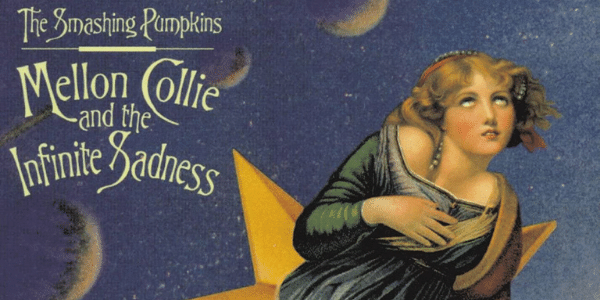 Posted at 13:32h in Student Blog by Jenna Edwards
Share

Listening to an album in its entirety is like opening a door to the true intentions of each single you’ve previously heard on the radio. Some people will probably know Mellon Collie and the Infinite Sadness from songs such as 1979, Tonight, Tonight, Zero, and Bullet With Butterfly Wings.

Billy Corgan screaming about how despite all his rage he is “still just a rat in a cage” is only one fraction of the beautiful tale of teenagehood that The Smashing Pumpkins tells in this post-grunge double album. Mellon Collie and the Infinite Sadness is 27 years old, but is timeless in how it conveys the human condition, taking us from dawn to dusk; through twilight to starlight.

The first thing that somebody may notice about the album is its beautiful cover art. The art is inspired by the Victorian era, and painted by artist John Craig. The woman on the front cover has the face of Jean-Baptiste Greuze’s The Souvenir and the body of Raphael’s St Catherine of Alexandria. The classical art on the cover encourages the listener to think twice about the time or the atmosphere in which the songs take place. The 1995 album is still distinctly modern, but utilises Victorian aesthetics to affirm the emotional climate of its storyline.

Mellon Collie and the Infinite Sadness is a concept album – but not one that tells a linear story, like The Who’s album Tommy. It was inspired by Pink Floyd’s The Wall, yet its storyline is still too vague to be considered a rock opera of any sort. The Smashing Pumpkins album follows the day of a young adolescent experiencing anger, heartbreak, and all the typical angsty teenage feelings one would expect to be portrayed by a mid-90s post-grunge/alternative rock band. Although this hasn’t been confirmed, I like to think the spelling of the word ‘melancholy’ as ‘Mellon Collie’ is meant to be the name of the person we follow from dawn to dusk, from twilight to starlight. I don’t believe that Mellon Collie is a concrete character with individual thoughts, feelings, and interests; Mellon Collie represents all of us as adolescents, whether now or in the past, experiencing the seemingly infinite sadness as we grow up.

The album is approximately two hours in length, spanning over two CDs. The first disc, titled Dawn to Dusk features some of the album’s greatest hits: Tonight, Tonight, Zero, Bullet with Butterfly Wings, and Muzzle. The grunge-inspired downtuning of the instruments make for a heavier, deeper sound, and Billy Corgan’s almost whiny vocal style is more than appropriate for the effect that the songs are trying to give. However, as mentioned earlier, by listening to the disc in its entirety you will unlock songs too soft or obscure to be played on The Rock FM or Radio Hauraki. Mellon Collie and the Infinite Sadness starts with a heartbreakingly simple piano piece of the same name, with string instruments coming in around halfway through. It has no lyrics; it is simply a piano introducing us to what is yet to come.

Cupid de Locke is another one of my favourite songs in the first disc that is far too often overlooked. The meaning aside, the song itself is beautiful. In the CD version of the 2012 remaster, Billy Corgan tells us in the sleeve notes that the band “even recorded whispering aerosol cans and haughty, rusted scissor snips to build up an unusual kaleidoscope chorus around the semi-chromatic wheeze of the synth.” The song is initially sung with Billy Corgan’s breathy, mournful vocals, and ends with a short spoken-word poem wrapping up the song’s themes of how we apotheosize love. In the same sleeve notes mentioned above, Billy Corgan writes, “Love is held in the ideal, driven up high above a nasty world and held gloriously in places of unshakeable faith.” Simply put, the song is about breaking down the rose-coloured visions of love, and shattering them with “one cupid’s arrow under your coat” – exposing not only the reality of love, but the reality of the world.

Dawn to Dusk ends with a song written and performed by guitarist James Iha, Take Me Down. His voice is softer and rounder than Billy Corgan’s, offering a gentle end to the first act of Mellon Collie.

The second disc – Twilight to Starlight – features one of the band’s most famous songs, 1979, a tribute to the bittersweet pain of youth. Ironically, Twilight to Starlight is where the 1997 album becomes more experimental, and we start to hear less and less radio hits. It opens with Where Boys Fear To Tread, which is fitting for the time of the day in which this part of the album is meant to take place. Dawn to Dusk is the presentable, energetic first act; it’s the time of the day when we are awake with everyone else, showing ourselves to the entire world. Twilight to Starlight is when most of us go our separate ways, and we can strip ourselves down to who we truly are. Yet some of the highlights of the album are in this disc, such as In The Arms Of Sleep and By Starlight. Sometimes, a band’s lesser-known works are its greatest forms of artistry.

Mellon Collie and the Infinite Sadness ends with the band coming together to sing with each other, in the song Farewell and Goodnight, again written by James Iha. The ending of the song takes you right back to the beginning of the album, as a new day starts again. I won’t spoil exactly how that happens – that’s why I encourage you to listen to the album in full, uninterrupted. I will promise you that the way the album ends is heartbreaking and powerful, and certainly not something to be overlooked. Even if you skip over the songs that you find too heavy for your tastes, it’d be shocking if you weren’t impressed by the ambition it took to write such an emotionally compelling 28-track piece of art. So, in my final words, I encourage you to fully immerse yourself in the world of Mellon Collie and the Infinite Sadness by making its world your own.