Principal for a Day 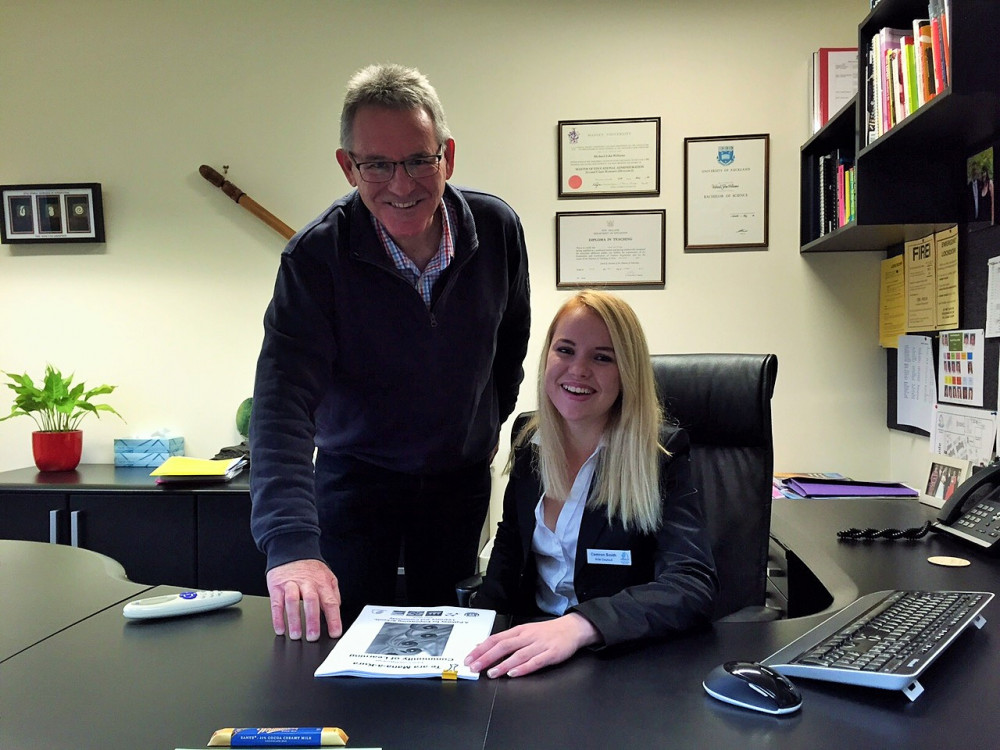 06 Jul Principal for a Day

Posted at 10:27h in Leadership by Roisin Lamb
0 Likes
Share

Monday the 26th of June was the day I took on the Principal’s duties. The day after, I was back in my normal position as a Year 13 student, very happy to be learning about critical pathways instead of attending meeting after meeting.

On this Monday, I got to school at 7:40am, an hour earlier than the rest of the students, to have a chat to Mr Williams about what I could expect my day to be like, and boy did it sound busy! At 8am, Mr Williams left his office all to me as I hosted a weekly catch up meeting with the Deputy Principals of our school. By 8:15am, I was walking down the hallway to the staffroom surrounded by the Deputies, which in my mind looked like a scene out of a film – one where the president’s body guards escort him to the press room, as I was told the Friday before that I was to deliver a message of my choice in staff briefing. Read More

Entering a room filled with the people who have educated me over four years, I was in awe because here I stand, a student in the position of their “boss” about to tell them what to focus on in their classes for the day. Quite frankly my only worry was that none of them were subconsciously grading me on my “speech.”

Following staff briefing I met with my Personal Assistant to discuss my schedule for the day, and well I got an amazing cup of coffee with that. I felt like I was starting to fit the part, because what’s more grown up than drinking coffee right? Meetings! That’s what is.

I had a meeting arranged with each of the Deputy Principals one on one so that I could learn more about their role in the school and what it is they are in charge of. I found this very interesting because, as a student, we are only exposed to a fraction of the amount of work that each of them do. The majority of the time all we think is that their job is to tell us off and send out reports, when in actual fact I learnt it is so much more than this. The way in which our school works is broken down into subcategories, such as leadership & development, guardianship, learning & academics and teacher development so between the six of them, they split their duties and create the school environment we are part of.

Year 9 assembly was probably one of the more challenging parts to my day, as Year 9s can be a bit rowdy and get distracted very easily. I chose to talk to them about taking charge of their destiny and not living their life at college in a repetitive way, urging them to participate daily at school.

Following my short break from being Principal during morning tea, I was back in my office, waiting for my next meeting. This just so happened to be with the Principal’s Appraiser. When I met him and he told me what his job is, I was astounded as I didn’t even know something like that existed, where you go around to schools, checking up on the Principal and his goals and objectives for the year. Then come the end of the year, he will do a write up for the board of trustees explaining the progress of the school’s Principal in terms of his plans for the school year.
The rest of my day consisted of handing out certificates to students who achieved outstanding results in things non-school related and then doing some class observations. However, I can assure you that once that 3:15 bell rang, I was very happy to hand back Mr Williams his position as Principal, because there is nothing easy about being the boss of a college. Heck, I didn’t even do half as much as what he would usually do.

This experience gave me gave me a deeper appreciation for all the work that goes on behind the scenes at our school, that none of us students get to witness. Our school is like a Jigsaw puzzle and without having one of the pieces we wouldn’t be able to create a pretty picture. Without the people that we have working at Pakuranga College whether it be the teachers, deans, deputy principals, assistants, receptionists, coaches, finance managers, cleaners or gardeners we would not be able to walk into the developed school environment that currently exists in our school.

So thank you Mr Williams for trading classes with me for a day so that I could be exposed to the very foundation that holds our school together.