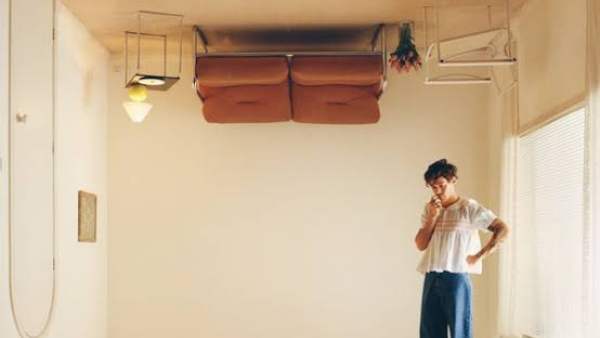 Posted at 10:34h in Student Blog by Jenna Edwards
Share

Listening to your favourite artist’s new album is one of the most bipolar experiences you may ever have. On one hand, you are bursting with excitement for new songs to add to your favourite playlist and eager for this new chapter in your life. Alongside this, you are also waiting anxiously in hope that the album will meet your expectations; that they haven’t thrown their whole musical career down the drain.

This happened on the 20th of May when Harry Styles, the 28-year-old singer/musician from Redditch, England, released his new album ‘Harry’s House’. Which I am pleased to say blew me away. As an avid Harry Styles fan and Directioner, this new album was an absolute godsend.

Most people know Harry Styles from the success of his previous boy band, One Direction, but since its members went in different directions (ironic isn’t it?), Harry Styles has established himself as the gentleman rock star of the pop world through his solo career of songs such as Watermelon Sugar, Sign of the Times, and Adore You.

The idea for this album was fabricated when Harry was living in Japan and listening to Haruomi Hosono’s 1973 album Hosono House. “It started as an idea,” Harry said, “I wanted to make an acoustic EP [Extended Play] or something and make it all in my house and make it really intimate.” As the album began to take shape, it started to form into a deeper, more personal meaning for Harry. “As I started making the album, I realised it wasn’t about the geographical locations. It was much more of an internal thing,” Harry explained, “When I took that title, put it to the songs we were making, it felt like it took on this whole new meaning. It was about, ‘OK, imagine, it’s a day in my house. What do I go through? A day in my mind? What do I go through?'” This new album, Harry’s House, transports and welcomes listeners to understand Harry on a deeper level than ever before —reinforcing Styles’ signature sensitivity in an authentic way.

Harry’s House album cover is a beautiful photo shot by Hanna Moon and showcases Harry in a delicate light while standing on the ceiling of an upside-down living room in dichotomy with his previous album Fine Line —going from a vibrant pink and blue vibe to now a monochromatic beige one, which is encapsulated in the energy, and tone of each album. Despite the room being practically empty, it is not to be read as ‘nobody’s home’. There is palpable warmth oozing from the room with an air of tenderness and sensitivity; it is saying all are welcome and it beckons you to approach. Beckons you to come into his most intimate space. Which we now know is a metaphor for Harry’s mind.

The debut single in this album —which I’m sure we’ve all heard— is As it Was. As it Was is a very bittersweet song about looking back on your past and showing us that sometimes you don’t fully understand what is happening until it’s too late. Now, nothing will ever be, as Harry sings, “the same as it was.” The upbeat rhythm and sound of the song illustrates the excitement of letting go of your past to encourage those new experiences, but the lyrics are some of the darkest on the album; about figuring out that you as a person have changed, but you may have never got to say goodbye to that old self. As Harry says “about a kind of metamorphosis and a perspective change”; looking back on life and making a choice on whether it’s devastating or brilliant and accepting the fact that it’s probably both. I think this is a beautifully crafted song, really showing two sides to the situation and illustrating our human relationship with time and regret. It’s not just any other pop song.

Love of my Life is the very last track on the album —certainly not to be overlooked, as it’s one of my favourite songs on Harry’s House. It’s a very sentimental song to Harry, an emotional ballad dedicated to his home, England. Love of my Life shows a very bare and vulnerable side to Harry’s voice, because of the lack of musical accompaniment which brings a certain raw feel to the album. He reflects on the good times he had while living there, “Take a walk on Sunday through the afternoon,” he sings, “We can always find somethin’ for us to do.” These delightful moments seem to be short-lived once we get to the track’s chorus, “It’s not what I wanted, to leave you behind.” Despite this song being written about Styles’s love for England, this song is so diverse that anybody can interpret it how they want; relating it to their own personal experiences. Love of my Life ends the album leaving you craving another verse to be sweetly sung by Harry Styles.

A blanket keeping you warm, a shoulder to cry on, a hand to hold, a lullaby to drift off to sleep. They are all personal. They are all intimate. They are all calming. They all make you ‘cry in a cool way’. They are all Harry’s House. I fully encourage you to immerse yourself in the beauty of this album, and experience the emotions drawn out by Harry’s magical voice. It ultimately is a musical masterpiece.