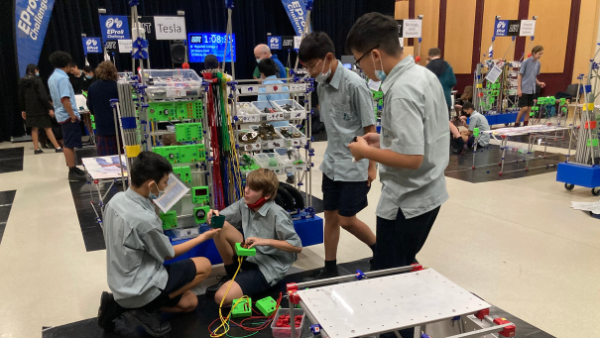 Posted at 11:54h in Co-curricular by Jenna Edwards
Share

In the final week of Term 2 we had four teams compete in the EPro8 Challenge senior category heats, with three of them progressing to the semi-finals. Challenges included creating a road marking machine and bed-tipping alarm clock mechanism! A special congratulations to ‘Windows 98’ (Kaley Rawlinson, Oliver Cao, Macy Butler, and Oorja Gandhi) who placed 1st, and ‘Ahhh’ (Ashleigh van Gemst, Oliver Trembath, Nicholas Williams, and Callum Irvine) for coming 2nd.

Four very evenly matched teams competed in the EPro8 junior regional heats, all taking out top honours at the event. Over two and a half hours they successfully completed many engineering challenges, resulting in a five-way tie for 1st place between the four teams from Pakuranga College and one from Howick! Our super students will now spend Term 3 preparing for the EPro8 junior semi-finals.

Year 10 student Cerys Gibb has recapped the event below:

On Friday the 8th of July, four teams of junior students from Pakuranga College competed in the first round of EPro8 heats. We were able to pick the team names ourselves, and ended up competing as “The Grigginators”, “No Bugs, Only Features”, “PakPro8” and “Ryan Carries.”  Accompanied by Mr Jupp and Mrs Collier, who trained us using the school EPro8 kits in the weeks prior, we travelled in the school mini buses to Mission Heights Junior College, where the competition took place.

Upon arrival, each team was greeted with their own work station, containing both building materials and electronics.  Before the competition began, our team (“The Grigginators”), had the opportunity to look around our workspace and see what other items were provided to us.  In the “random stuff” category, we were given a whiteboard marker, a coil, and a small rabbit finger puppet, which my team affectionately named “King Grigg”.

Soon enough, our building time started, and we got to work. We had an array of different tasks to choose from, and we as The Grigginators chose to build a vehicle using building materials, electronics, and the whiteboard marker that would draw lines on a “road” (a grey whiteboard panel.)  Using the power of teamwork, we managed to complete the first part of the task, with remote control buttons that moved the vehicle back and forth. As we pushed a different button to get this part of the challenge marked, we were graced with music that made for incredible dance material. And, as other teams completed their tasks, we were given even more music to dance to.

Over the two and a half hours allotted, we completed many more of these tasks within our chosen challenge, leaving us with 320 points. Not only that, it seems as though every other Pakuranga junior team was just as successful! Because when it came to the prizegiving ceremony, it was announced that there was a five-way tie between all the Pakuranga teams and the Howick Problem Solvers, all finishing on 320 points.  After this monumentally successful day, we left ready for another term of preparing for the semi-finals – a highly anticipated event!