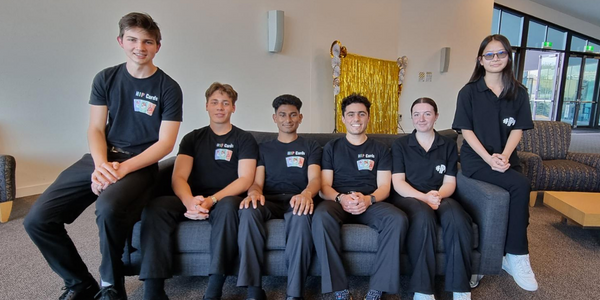 Posted at 12:29h in Academic by Jenna Edwards
Share

The 2022 Young Enterprise Scheme has come to a close and it has been another successful year for Pakuranga College competing in the East Auckland region of this nationwide competition. On Monday 31 October, we had two businesses, HIP Cards and Prefix, represent the college as two of the top eight teams in the region, who pitched their business model to judges on the night.

HIP Cards, made up of Eric Irani, Aman Kumar, Joshua Hall and Lucas Greenwood produced a deck of playing cards with a range of cultural greetings supported with custom animations. Prefix, made up of Michelle Furter and Cefion Lee engaged in a long journey of research and development of their pre-workout gummies which they have proudly taken to market recently.

Both groups presented confidently and professionally but unfortunately did not place within the top three. HIP Cards did, however, receive a few awards on the night including the Cultural Excellence Award, EY Individual of the Year (Eric Irani) and were also named runners-up for a National Excellence Award sponsored by BP, Best Social Enterprise.

Making it to the regional finals is a huge achievement on its own considering the number of schools in the eastern region and the competitiveness of the competition in Auckland, especially. These students can be very proud of their efforts and if you would like to support either business then feel free to visit HIP Cards and Prefix.

We look forward to another exciting Young Enterprise year in 2023.