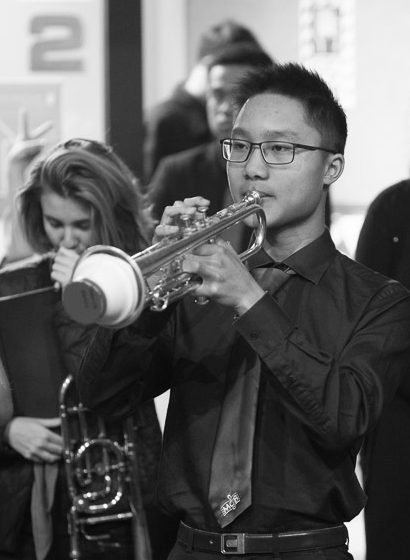 Posted at 12:26h in Music by Roisin Lamb
0 Likes
Share

Year 13 student Angus Zeng has recently earned a place in the New Zealand Youth Symphonic Winds. Angus, who has been playing since Year 6, is one of just 6 trumpet players in the national ensemble which accepts musician between the ages of 16 and 24.

Angus says that he initially found out about the NZYSW when he was encouraged to apply by the President of the News Zealand Concert Bands Association. “I wasn’t convinced that my playing was good enough”, he says, “so I waited a year before applying”.

In addition to his other musical and academic commitments, Angus plays 1st trumpet with the Manukau Concert Band. As Head of Music at Pakuranga College, Richard Breed commented:

“I am very proud of Angus’ achievements this year.  In addition to all of the wonderful work he is doing at school (in his leadership roles, starring in the production, as well as being our lead trumpet in both the Concert Band and Jazz Band), he has recently earned a place in the NZYSW.  This is a collection of the finest young band musicians from across NZ and gives him the opportunity to work with some amazing musicians and internationally acclaimed directors.  He has also recently performed in the NZCBA National Festival as 1st trumpet both in the award-winning Manukau Concert Band, and the Eastern Stars Concert Band”.

Angus himself is keen to give credit to Mr Breed, who is currently his trumpet teacher, saying, “I owe a lot of my recent growth as a musician to him”.