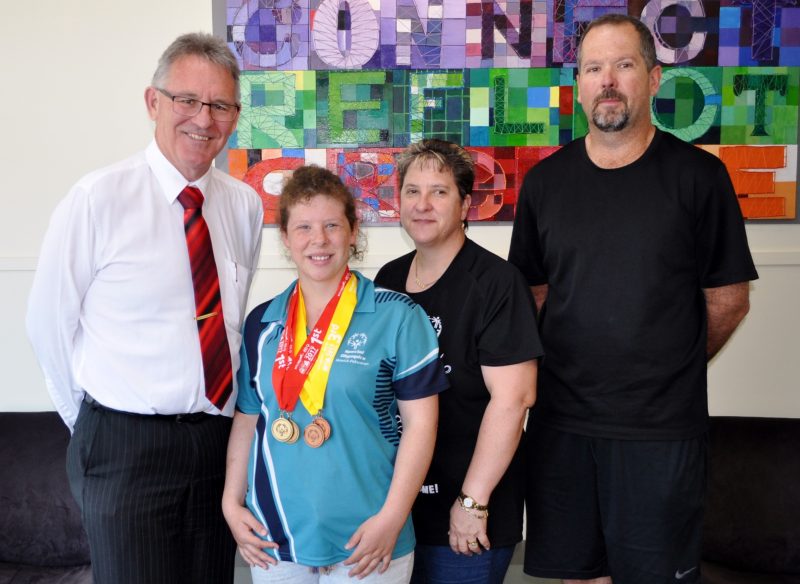 Aimee who is diagnosed with Williams Syndrome, a genetic condition, present at birth and characterised by medical problems, including cardiovascular disease, developmental delays and learning disabilities. Which often occur side by side with striking verbal abilities, highly social personalities and an affinity for music.

Aimee, one of six others with Williams Syndrome competing at the recent games, has been training since she was just eight years old and has achieved amazing results. Winning a Gold for 100 Metre Freestyle where she also achieved her personal best and was the top 100 freestyle women winner. In the 50 metre butterfly another Gold and was the top women competitor.

When asked what goals she next had set her eyes on, Aimee’s reply was to, “become a Global Messenger for the Special Olympics”, which involves speaking about intellectual disability, the Special Olympics and her own experiences, with the aim of having a positive influence on the community and policy makers on issues of concern to the intellectual disability community.

She also hopes to compete in the next Special Olympic Games at Abu Dhabi in 2019.

Principal Michael Williams, was pleased to offer his congratulations to Aimee and her parents; Dean and Tasha. “Aimee is great to have in the school, she is always positive and cheerful. She is very determined and works hard to achieve her goals, we are very proud of her achievements.”