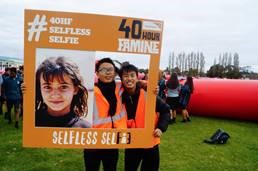 Posted at 09:04h in General by Roisin Lamb
0 Likes
Share

Tuesday 16 May, marked the official launch date for the 2017, 40 Hour Famine at Pakuranga College. The lunchtime field located near Pamela Stone featured an inflatable soccer field as well as a performance stage, kindly provided by a not-for-profit youth organisation called Zeal. The event entailed a mixture of performances by Pakuranga College’s very own guitarist, Mark Bulos, as well as FannyPak, KPOP, and an outside hip hop group called Fresh. Games such as Twister, 5×5 football led by the school’s sports council, and photos with World Vision frames provided entertainment for the attendees. The event was MC’d by Nigel Munemo, one of our Head Students, as well as a representative from Zeal. Their presence on stage provided hype for the crowd and made for an interesting transition between acts. The thorough planning of the event was carried out by members of the Interact Club, a high school tier of the Rotary club, which has been in charge of 40 Hour Famine collaboration in the school throughout the years.

The atmosphere was one of enjoyment, as students and teachers alike were greeted onto the field by the sound of music, with the reminder that the events happening were much more than performances and games for our enjoyment, but rather a cause greater than self. Bradley Davids, a representative from World Vision, spoke to the Pakuranga College attendees about the purpose of this year’s 40 Hour Famine and the potential we have as students to provide positive implications on the children of Syria, which is the main focal point for the 2017 40 Hour Famine.

For six years, over 13.5 million people have been affected by the Syrian conflict, 8.2 million of which are children and 3.7 million of which are children who are out of school. This year, the Interact Club has set a target of $6000 which will go towards building classrooms in Jordan called Child-Friendly Spaces. The Child-Friendly Spaces in Jordan are classrooms where the children of the Syrian Refugee Crisis can recuperate from the trauma they have experienced, as well as being given the opportunity to learn in a safe environment where they are be able to enjoy their childhood. Through the collection of sign-ups and distribution of over 200 booklets during this year’s launch day, students were able to take home their own 40 Hour Famine pack containing fundraiser booklets and their very own World Vision bracelet. Students have the choice of donating money on the Pakuranga College Raise Fund page found on the New Zealand World Vision page, as well as collecting money with their collection booklets. 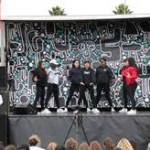 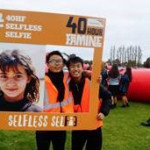 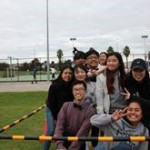 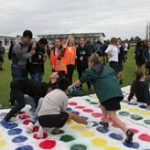 This year, 40 Hour Famine is on June 9-11, a date on which students all over New Zealand will be raising funds and giving up essentials, in hopes of growing an understanding as to what the children of the Syrian refugee crisis may be experiencing. 40 Hour famine is not an intention but rather an incentive to spark change in a society that has allowed people to be mistreated and stripped of the rights they so rightfully deserve. The purpose of Launch Day was to raise the profile and awareness of the 40 Hour Famine at our college whilst creating a fun, exciting and rare event students could enjoy together.

To Nate and his team from Zeal, Bradley David’s from World Vision, Nigel Munemo, Mark Bulos, FannyPak, the KPOP group, the hip-hop group Fresh, the Interact Executive team, especially Samuel Chen, Crystal Leung, and Mark Mitchinson, as well as the interact volunteers, teachers, and students, who gave up their time in order to make this year’s Launch day a success, Pakuranga College thanks you. The 2017, 40 Hour Famine Launch day will definitely be a date to put down in Pakuranga College History; a legacy we hope will be continued by future Pakuranga College students.