10 Things I Hate About You Review 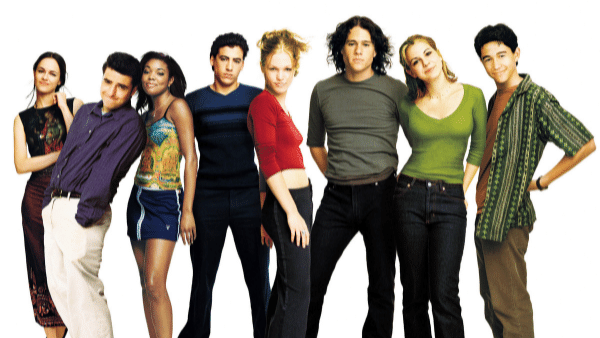 01 Jun 10 Things I Hate About You Review

Posted at 08:37h in Student Blog by Jenna Edwards
Share

10 Things I Hate About You is a modern take on Shakespeare’s The Taming of the Shrew set in an American high school. The story is clever and funny, with plenty of teenage angst and romance.

It is a classic teen movie that’s funny, romantic, and relatable. Despite the film being released over 20 years ago, the issues the characters face are still relevant to teenagers today. I think it accurately portrays the high school experience, and the ups and downs of teenage relationships.

The story follows the Stratford sisters who are complete opposites. Bianca, the popular and beautiful cheerleader and Kat, an unpopular outcast. The film is well-written and directed and has a star-studded cast, including Julia Stiles, Heath Ledger, and Joseph Gordon-Levitt.

Kat Stratford (played by the always amazing Julia Stiles) deals with the trials and tribulations of teenage life. From boy drama to strict parents, Kat has to learn to navigate her way through the rollercoaster of adolescence. Along the way, she learns some valuable lessons about life and love.

One of the main issues that Kat deals with is the pressure to conform to what others expect of her. She is constantly being told by her father, her sister, and her friends that she needs to change herself in order to fit in. This pressure to conform is something that many teenagers still face today.

An issue that many characters deal with is the double standard that exists for girls. Both Bianca and Kat are constantly being told they needs to act a certain way and behave a certain way in order to be respected. However, their male counterparts are not held to the same standard. This double standard is still common in society.

10 Things I Hate About You is a must-watch for any teen who’s ever felt misunderstood or lost in the world. The movie is clever, funny, and romantic. The characters are likable and the story is engaging. It’s a feel-good movie that will leave you with a smile on your face.